On belonging to a country that cannot keep its children

“You've wasted the (people with) talents and given them to the foreigners" said a prominent banner in downtown Beirut on the very first day of the uprising. It made the Lebanese government responsible for the ‘brain drain’ caused by ongoing migration, and declared the latter a problem that could be avoided if it wasn't for the mismanagement of the economy by the political and economic governing elite.
I have noticed with interest the extent to which migration figured as a lament 'look what you are making us do', as problem 'our youth are all leaving' and a sign of governmental disfunction 'we shouldn't have to leave', in the discourse of the Lebanese uprising.
Sometimes, migration has been a factor in the uprising without people being conscious of it as such. Take the way Tripoli, the capital of northern Lebanon has risen in prominence as one of epicentres of the protests. Tripoli for so long perceived by Beirutis as a poor, underdeveloped part of the country, festering with backwardness, poverty and Islamic fundamentalism rose in ways no one imagined it to be capable of. Not only did thousands descended to the capital's main square rejecting traditional sectarian politics just as much if not more so than they did in Beirut. They did so with style leaving Beirutis literally speechless: a local rapper got everyone grooving in the square. They were at it in their thousands and it was incredible to watch. A story that is not told is that these features of Tripoli's 'modernity' are impossible to disentangle from it being one of the key centres of migration to Australia and where Australian Lebanese continuously return. Tripoli has a rugby league team, hardly a home grown sport and it is impossible to go to Tripoli without hearing people speaking English with an Australian accent. And while the research is yet to be done, I would think that Tripoli's uprising is a diasporic phenomenon through and through. But so is Beirut's. I have often sat at street meetings where the conversation had to happen in English because the participants'm Lebanese wasn't good enough.

And yet, the man in the dark photo below was screaming "I don’t want to be in a situation where my relatives ring me and say 'your father's not doing so well' and I am too far to be able to do anything". The discourse about migration being something bad that happens to you has always been present in Lebanon, but it often took the back seat to an opposite celebratory discourse: migration as a sign of the Lebanese's adventurous and ambitious character something that runs in the Lebanese blood and has been inherited since the times of those trading, adventurous and ambitious Phoenicians. The uprising has definitely brought the discourse of migration as a social pathology to the forefront. One can hear it everywhere: we are demonstrating because "we're sick and tired to have to migrate", "I have just got my degree, why should I be looking for a job outside of Lebanon" and then there is this guy with a placard stating the names of all of his friends who have migrated and telling them that he is demonstrating 'because we want you back'.
But it was the woman holding a sign stating that she is demonstrating ‘For every drop of tears that has fallen at the airport’ that broke me. For the sign points not so much at a social problem but at a primal injury that is at the heart of Lebanon's diasporic culture. I have spent so much of my academic life researching this primal injury, that manifests itself most clearly precisely at the airport when one sees parents cry as they say goodbye to their children. I have analysed this injury but i've also analysed the Lebanese art of acting as if there is no injury at all, a whole culture of dissimulation that is itself a symptom of the depth of the injury. 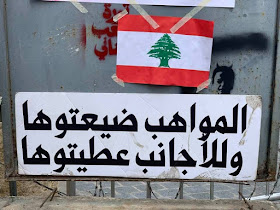 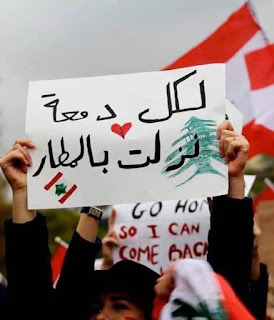 For a time, I used to wonder at the reason why Lebanese migrants, despite their propensity to narcissistically over-valorise themselves and their achievements, always betrayed a sense of inferiority in the face of the inhabitants of the lands to which they migrated. I used to think that it was an internalisation of a developmental racism which made so many of them see westerners as superior. But then, not only was this shown to be again and again not true, it also failed to explain the presence of this sense of inferiority to people they actually racialise, people who they deemed in a racist way civilisationally inferior. Slowly the source of this sense of inferiority became clear. The immigrant might do very well socially and economically compared to the locally born but nothing will alter the simple fact that unlike the local, the immigrant belongs to a country that could not care for them. Or as put to me poetically by a Venezuelan Lebanese informant once: 'we are the people whose country could not keep them.'
The bringing of this wound into the open is part of the incredible socio-political but also psychological 'revolution against one's own self' that's been unfolding in the streets of Beirut since the 17th of October.
That the President of the Republic allowed himself to tell the demonstrators a variant of the 'if you don't like it here leave' is a sign of how remote and disengaged from popular sensibilities this whole regime has been.
Hage Ba'a at 2:57 AM
Share